The History Of Satan 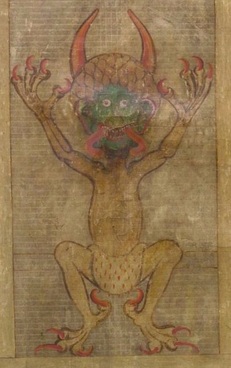 Codex Gigas devil
This is the second of my two articles about Satan.  The other, "The Implausibility of Satan", I must confess to being the better article, and recommend reading it first.  My expertise is more in logic and not in history.  That said, I believe that some information I have found on Satan from a historical perspective has merit, and so I have posted it here.

Some readers who have read the above material from Mr. Doherty have taken issue with the claim that Satan is a character added to Jewish thought not long before the Christian era.  Some readers have pointed out that Isaiah is very old, and Isaiah has references to Satan.  Well, maybe not.  The actual scripture references "Lucifer".  It is commonly believed by Christians that Lucifer and Satan are the same being.  But is this really true?  I don't expect anybody to take my word that they aren't the same being, but there are Christian sources that say they are not the same being!  Here are some links:

Also, here is a link to article that says much the same as Mr. Doherty says, and also discusses Isaiah, but give more details.  It is an interesting read.

Some people want to insist that the "Satan" in the Book of Job is the same Satan as Christians understand him today.  Just reading the Book of Job, and if Satan is already the enemy of God as Christians say he is, then why is God spending so much time talking to Satan, and allowing him to torment Job?

One reader of this site claimed that the explanation for why there is so very little about Satan in the early Jewish writings is that God uses "progressive revelation." In other words, God chooses to reveal more to man over time.  God feels that more primitive cultures were not ready to know as much about spiritual matters as we are today.  Well, if the "Satan" in Job and Zechariah are the same Satan as Christians understand him to be today, exactly what someone was to understand of Satan at the time those books were written does not seem to be very clear.  Most Christians today feel that people must be wary of Satan's tricks.  If Satan's tricks are something that people should be wary of, I don't see how anyone could have understood that from the references to Satan in Job and Zechariah.  So, for thousands of years prior to the Christian age, Satan had been free to do his tricks upon mankind, and God didn't bother to tell anyone to be wary until He deemed that it was time for some more "progressive revelation"?

As I said from the beginning, I know that history is not my forte, so if someone chooses to dismiss what I'm saying here because it isn't my field, okay.  But check out my links, and then read the Bible references yourself.  And then ask yourself which explanation for why Satan's character seems to have changed over time seems more believable, "progressive revelation" or Satan is simply a fictional character whose persona has changed over time?