1) The bibliographical test. This answers the question: Do we have what was originally written?

The problem with your criticism is when we apply it evenly across the board; we come to the conclusion that we can know nothing about the ancient world. You see we have no original manuscripts (Autographs) from the ancient world. All we have are copies. And as I have pointed out before, the representative texts for the NT far exceed, in both number and early dating, any other document of the period. This is the importance of having a baseline to judge from. You cannot do historical investigation in a vacuum. 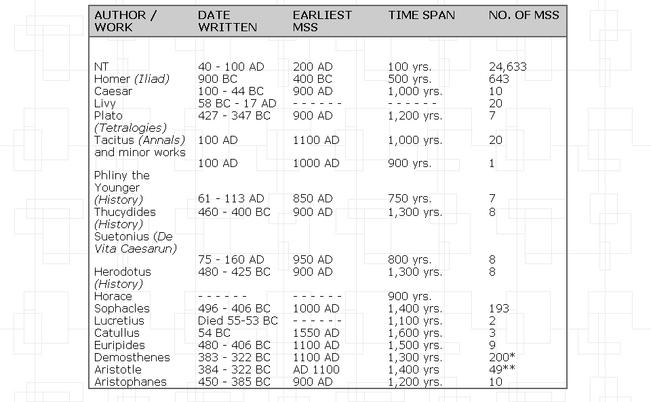 You are right about the John Rylands Papyrus. It is a fragment of the Gospel of John, dated c. 125 AD. The important thing to remember is that the Gospel of John was written c. 100 AD. This gives us a portion of text from within 25 years after the writing of the original text that we can compare with our other texts to get a rough gage on their accuracy. It is not everything we use, but it is one element that comes into play that other documents don’t even have. The next manuscript we have is Bodmer Payri. This contains almost complete copies of John and Luke. It dates c. 200 AD, about a hundred years after the close of the NT. As you can see from the chart above, no other document comes close to having this kind of early attestation. Yet, most of what we know about history comes from many of the above works. Next comes Codex Vaticanus (c. 325 AD.) This is a complete copy of the NT, plus a complete copy of the LXX.

The list goes on and on. There are over 5,000 Greek Mss., and another 19,000 translated Mss. copies. It is all of these Mss. that give us the ability to work backward to arrive at an accurate copy of the original. One of the most helpful characteristics in these documents are the errors. By comparing documents and the differences we are able to determine which documents were copied from which other documents. This allows us to group the copies into families. It allows us to trace their movement around the ancient world. It also allows us to find the errors and eliminate them. In the chart below we see a simplistic view of how families are grouped (P, Q and R). Once again it is the errors that help us group them. By examining the differences in the texts of a family we can eliminate the errors. Once we have worked our way back to the next level and determined the text of the copy the family came from (E, F and G), we can compare the differences in them and eliminate further errors to give us a even more pure text (A). This is why a great number of early texts can give us a real good idea of what the original said.

Next to the NT, one of the best-represented texts of the ancient world is not a history, but a work of fiction: Homer’s Iliad. The chart below will compare the two. You will remember from the chart above that for the Iliad we have about 640 Mss.,the earliest of which is some 500 years after from the writing of the original. Given the copies we have we can determine that out of the 15,600 lines that make of the work, we can with some degree of certainty rely on all but 764 lines; that’s about a 95% accuracy. With the NT, out of the 20,000 lines that make up that work we can with some certainty say that we got all but about 40 lines right: that’s a 99.5% accuracy. And on the lines we are not sure about, they are things such as, did Peter call Jesus by his name or did he call him Lord? It is that kind of thing.

I hope this helps you understand that if you plan to attack the NT on the basis of textual accuracy you will have to eliminate all of ancient history, because there is extraordinary evidence for its textual accuracy, the kind of evidence that no other document has.

But it doesn’t end there. We can also go back to the writings of the Early Church Fathers, including the Apostolic Fathers (the guys who knew the apostles). They quoted extensively from the NT. We can in many cases use their writings as a guideline. We also have lectionaries. These were books that contain scripture readings for the week in the early church. Those lectionaries can also be used as a check in many cases.

This is why one of my guidelines states that any criterion we use cannot, when we apply to the rest of ancient history, eliminate what we already know to be history.

I’ll stop here. If you feel we have sufficiently dealt with this point, I’ll go on to your next point.

Again, I'm afraid that I must differ with Mr. Lenardos.

Brady goes on to mention about how, over time, there are all these various manuscripts, that can be used to deduce what the original says.  But, there are reasons to not be so sure of this.  I'm now going to quote extensively from Paul Tobin, on the topic of "Manuscript Fallacies":  (I confess, one must conclude that Tobin is a biased source, being an atheist. On the other hand, isn't everyone a biased source?  Are Lenardos' sources unbiased?  All we can do is to try to acknowledge possible bias of the source, and see whose argument is stronger.  So, without further ado, here is some key points by Paul Tobin:)

Another thing that Tobin notes is the fallacious way the number of manuscripts are counted, when comparing Homer to the NT:

Next up, is the reported accuracy.  Lenardos says,

My first response is, as I noted last time (how could you forget, Brady?) right off the proverbial bat, there is Mark 16:9-20 that is in dispute.  And, those verses aren't so trivial, without them there are no resurrection appearances in Mark.  So, when you say something like the differences amount to nothing more than, "did Peter call Jesus by his name, or did he call him Lord?" well, I'm afraid that I must call a load of bull a load of bull.

So, I'd like to quote some more from Tobin, this time on the amount of variances in the manuscripts:

I hope interested readers will read all of Paul Tobin's article, http://web.archive.org/web/20091027110452/http://geocities.com/paulntobin/manufall.html And, by the way, his site is chock-full of great information. Interested readers are encouraged to check out other articles on his site.

But, I think all this talk about manuscript evidence is getting off the track.  I'm actually willing to concede that it is reasonably possible that what we have today is reasonably close to the original words.  I don't think it is conclusively proven, but I can concede that may well be true.  But, does that really mean that much?  I haven't seen any evidence that the Gospels are even supposed to be history!!!  The stories are presented like a fictional story.  The stories are told perspectiveless, like a fictional story. Nowhere do they say anything like, "Joe was standing near Jesus and heard him say..."  There is no "who saw what" information at all.

There are a few places where the Gospels make claims to truthfulness, such as were Luke in his introduction says that he endeavored to make sure he got everything right.  Then again, he also speaks of things "handed down to us" which doesn't sound exactly like he's talking to eye witnesses as is usually claimed.  There are some other similar claims throughout the text that say similar things about "this is really true".  But these few claims cannot override the fact that the stories are clearly told in a fictional format.  Some have argued that I'm applying modern standards of historical presentation that didn't apply.  But, just reading the letters of Paul shows this is not the case.  Paul says, "I did this," "I went here".  Paul's account is a first hand account of what he said and did, and is written as a first hand account.  Therefore, one could reasonably conclude that if the Gospels were intended to be first hand accounts, they also would have been written as such.  Until you can prove that these stories have any business being taken seriously as a historical narrative, then it doesn't really make a bit of difference how accurate our copies are.

In conclusion to Brady's manuscript evidence, I think I've shown it to be rather less impressive than he claims.  So, we can possibly move on to other topics.  By the way, are you ever going to answer my questions?:

2.  Since we both agree that there is good evidence Constantine was emperor of Rome, would you bet your eternal soul on it?